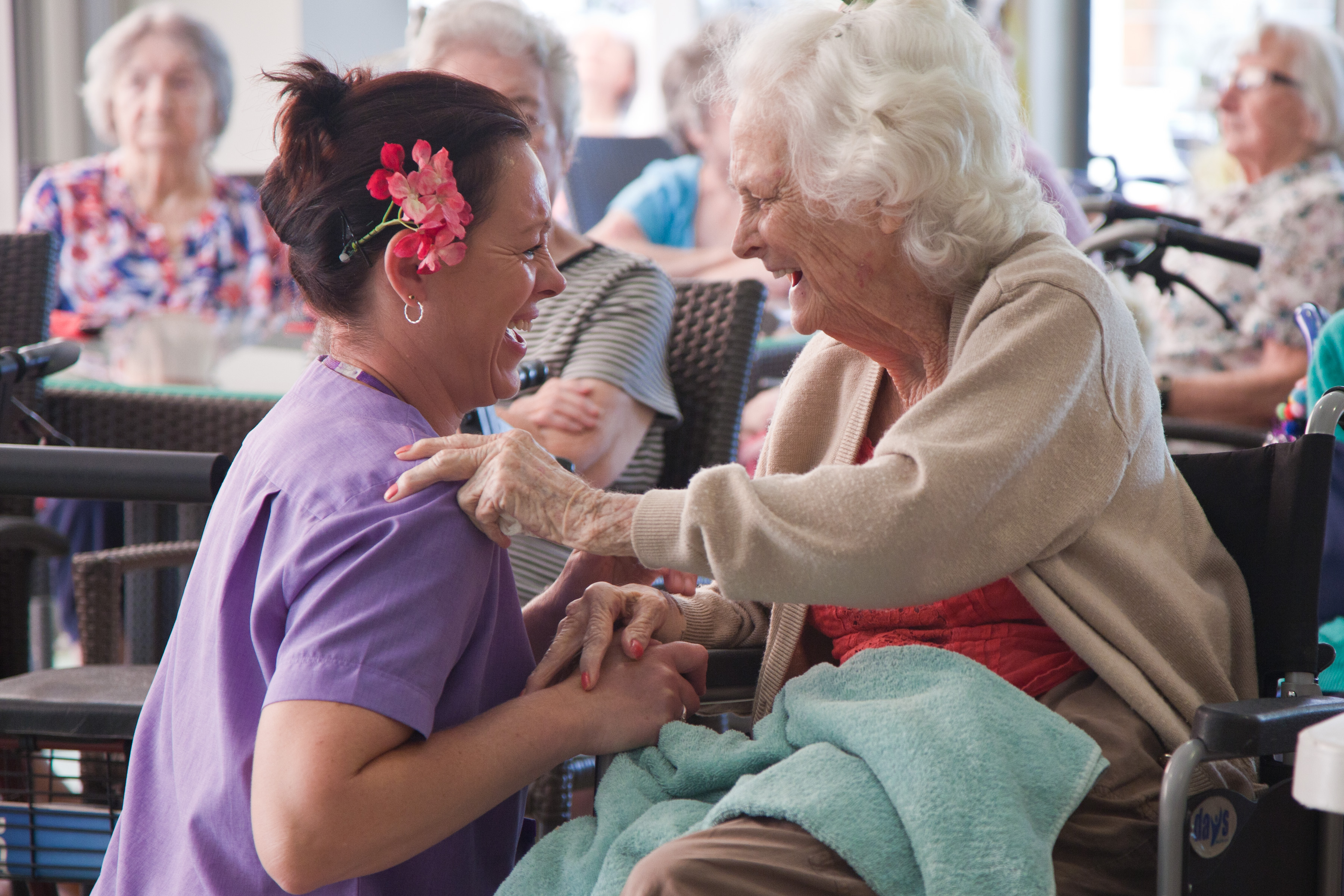 It all started when someone tweeted the link to a video entitled, “It Takes a Community.”  Curious, I clicked on the link to watch it. The video starts off like many promotional videos but about 30 seconds into this video, I realized there was something very special going on here.  The sincerity and authenticity of the people being interviewed was very real. Their passion and love for the people they are serving was riveting.

Over and over each person repeated how important relationship is to providing quality care.  As the video ends an older woman an Arcare resident states that “Laughter is a great therapy.” I was moved to tears.

Immediately, I went to the Arcare website and contacted Daniella Greenwood, Strategy and Innovation manager for Arcare Aged Care. Daniella had appeared in the video.  We connected and what I thought would be about a 45-minute interview turned into a 90-minute exchange of experiences, laughter, a few tears and learning about Arcare’s philosophy of care.  There is so much to write about, I’m going to break this story into several parts. Please stay with me on this one, you’ll love what you read.

To begin, throughout the video, Daniella Greenwood reiterates again and again that

“…nurturing relationships between staff, families and residents, is the most important thing we do.”

In my upcoming book, I’m currently researching and writing about person-centered care.  It’s a bit funny because as I was working on this topic it was becoming clearer and clearer to me that person-centered care isn’t just about giving the resident choices, such as when the person would like to rise in the morning or what would they like for breakfast or in which activities they would like to participate.

Rather quality care requires something that may be missing in person-centered care, i.e., nurturing a culture of relationship between the stakeholders that transcends the job, one that moves staff beyond their professional distance and gives  them permission to bring their humanness to work with them.

Let me explain what I mean. A nurse aide enters the resident’s room.  Having received training in providing person-centered care, she has waited until the resident has finished their afternoon nap but now she needs to get the resident to take her medications.

As the nurse aide enters the room, pleasantries are exchanged, the nurse aide is careful to address the resident as they wish to be addressed, they exchange some light conversation but then the agenda emerges, “I, the nurse aide, am here primarily because I need you to do something.”

Granted it is good that the nurse aide is following what she has been taught but it is not the end of the story as Daniella points out in the video: 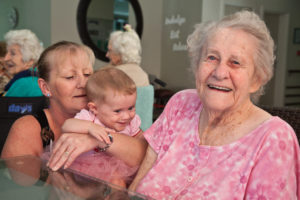 “…old people are vulnerable and they need critical support and assistance but that’s one small part of what they need, the rest of it’s called life.”

Life, what is that? What is life for the person living in the nursing home?  As one resident said to me, “I have a lot of people around me but there is no one here just for me.”  “…just for me…” what does this mean? What is this person telling me?  Daniella explains it this way “…it’s about context, real people in real relationships in a social world, hanging out together. Life is what happens during the care, the task, whatever is going on, everything can become a moment of connection. This leads to the natural creation of genuine friendship.”

So what you find in the Arcare culture, largely instigated by Daniella, is staff and residents becoming best friends, hanging out together, doing things together off the clock, even taking trips to the beach, or the resident going home with a staff member for a home-cooked meal. They call it the “Buddy” program.  I’ll write more about this in the next installment.

Surprised by the many positive comments she was getting about her house cleaners.  Daniella asked “I kept hearing about these fantastic relationships that the residents had with the cleaning staff. What is it about these relationships?’ The resident said to me ‘It’s just a normal relationship.’ I said, ‘Guess what?’ the house cleaner is probably one of the few people who are not trying to take her [the resident’s] clothes off or have seen her in her most private moments.” 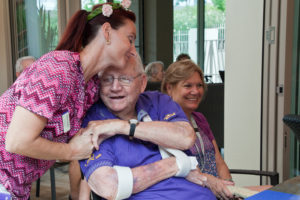 “It’s just a normal relationship.”   They are friends.

Daniella, realizing that cultivating an environment where relationships would be key realized that nurses coming from acute settings such as hospitals where patients may only be with the nurse for a few days are likely encouraged to maintain a “professional” distance from the patient.

When the nurse arrives at the nursing home to work, she may bring that mentality with her and pass that on to the personal care workers.  However, in the nursing home setting keeping a distance does not make sense as the residents may be with the staff for years. With that she was set to provide training for the nursing staff however she was met with a great deal of resistance, until she had an epiphany moment.

One afternoon, Daniella happened to overhear a conversation.  Daniella, could not see the people talking as she was standing out-of-sight around a corner.  What she heard was a mother praising and encouraging her children.  The two children had come to the nursing home to see their mother. “It wasn’t earth shattering but it was this gorgeous conversation.

She was really boosting their self-esteem. One of them had had a bad day at school, it was just lovely.  I poked my head around the corner and looked.  And there was one of those care staff members who I thought was a monster with all of these skills that I was just about to train: empathy, noticing, presence. She had it.  Then I felt that combination of shame and epiphany.”

“And I thought, ‘Wait a minute. She doesn’t need to be trained to bring this to work with her. She needs permission.’” 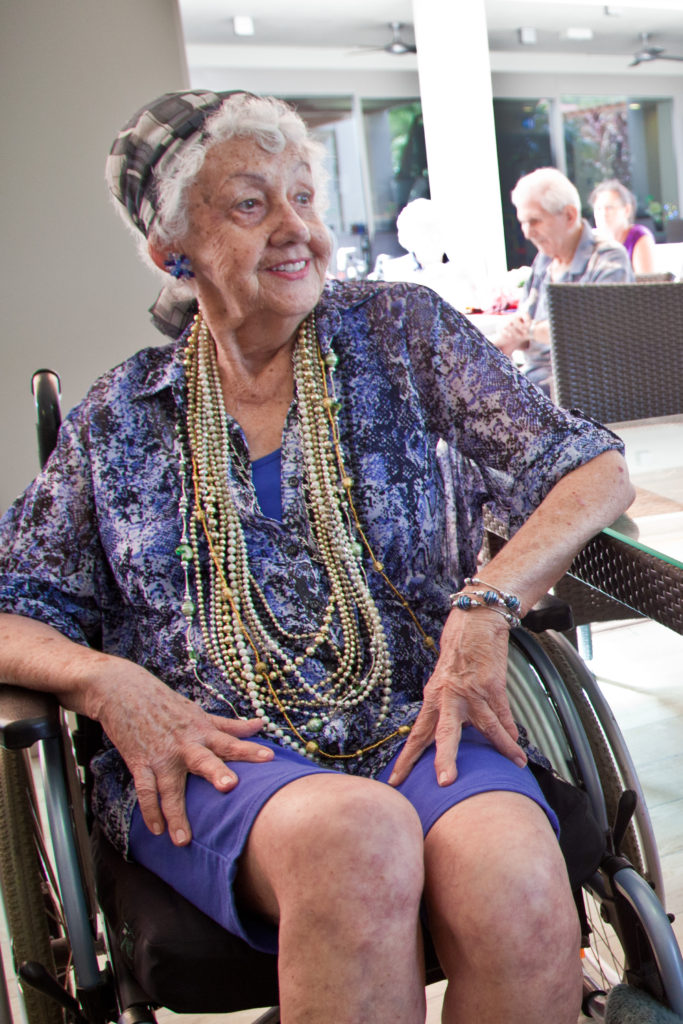 From that point forward the culture at Arcare evolved from person-centered care to relationship-centered care using the Senses Framework (Mike Nolan, 2006)

At this point you’re probably wondering what this all has to do with creating “super” volunteers.  The answer is simply: everything.

Everything that I have been promoting concerning “super” volunteers revolves around relationship.  Daniella has confirmed what I told you I was arriving at: there is something beyond person-centered care. It is relationship-centered care and “super volunteers are in a great place to provide that level of care.

Coming in the next segment of “Down Under: Relationship-Centered Care, I’ll explore the Senses Framework and how Daniella trains the Arcare staff and volunteers…

It's time for you to discover the difference a robust volunteer program can make!

Volun-Cheer-Leader – rethinking the role of volunteers!

Wherever there are nursing homes, whether in U.S. or around the world, there is a ever growing need for highly trained, highly committed, compassionate, passionate volunteers serving older adults in nursing homes.

Connect with Us via Email